As Colorado Beer Geek, my main focus is keeping track of upcoming breweries for Colorado Brewery List (CBL).   In doing so, I live up to my “Geek” moniker with my collection of data, (you should see my spreadsheet!).

I thought it would be fun to share some of this geeky information with you. 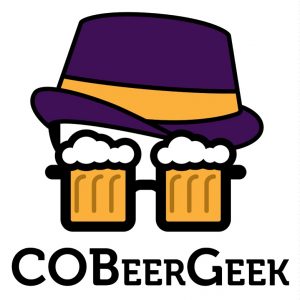 How many Colorado breweries are there?

Let’s start with some general numbers:

As of the posting of this article, there are 423 open breweries in Colorado!

Of those: 383 are a unique or original location and 40 are an additional location of one of those breweries.

On top of that there are 34 taprooms (with no brewing operations on site) and 25 production-only breweries (no public visitors).

In the constantly changing Upcoming Breweries page there are 49 total in development: 19 that are Under Construction (actually building out on location), 7 are in an advanced planning stage, and 23 are in early concept stages.

For more definitions of some of these terms please see our new FAQ/Glossary page.

Colorado Brewery List also has maps for 26 Cideries and 13 Meaderies.

The Colorado Brewers Guild and the Brewers Association both do tremendous work in supporting the craft beer industry.  Most Colorado breweries recognize this and are members of these organizations.  Regardless of membership status, the Brewers Association also recognizes those who fit their definition of being an Independent Craft Brewery.  On the details pages for each of the breweries, we proudly display their membership and independent status.

That’s all cool, but is my dog welcome at these breweries?

Colorado is very dog friendly and the same goes for its breweries.  In fact, the dog friendly brewery category is Colorado Brewery List’s top search.  The chart below breaks down the overall status of a brewery’s dog friendliness in Colorado.  There are still a good number of breweries on CBL where this status is not known, please let us know if you find one that needs to be updated. 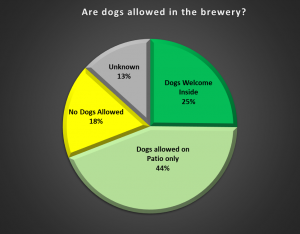 Where in Colorado are all of these breweries?

Regionally, 39% of Colorado breweries are in the Denver Metro area, (with nearly half of those being in Denver proper and the rest located from Castle Rock to Golden) 37% are in the remainder of the Front Range, (breaking this down: 12% South of Denver, 12% in Boulder County, and 13% in the Northern Front Range) 24% are West of the Front Range, and 0.5% (2 breweries) are on the Eastern plains. 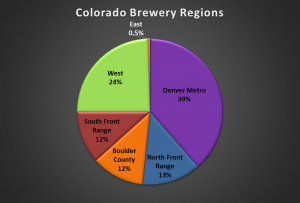 Here’s a picture of a heat map of all the currently opened breweries.  You can easily see the huge clusters that are in Fort Collins, Boulder, Denver, & Colorado Springs with smaller bright spots for Grand Junction and Summit County. 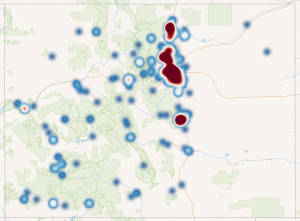 More specifically, there are breweries in 43 of Colorado’s 64 counties.  The following map shows the breakdown of where the breweries are by county… 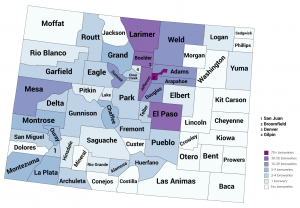 Note:  While Mineral & Moffat counties don’t have a brewery, they both have a taproom, (no brewing operations).  (Spare Keg Brewerks & Yampa Valley Brewing)

Let’s talk about the specific towns and cities…

There are breweries in 110 different towns and cities in Colorado with the latest being Craftsman Brew Co in Edwards and Brew Zone in Rifle.

The largest number of breweries are located in the city of Denver which has 75 breweries (two are in Adams County), Colorado Springs with 34 (with 9 of those opening in the past 2 years!) Fort Collins with 24, and Boulder with 17.  Some smaller towns with lots of breweries are Longmont with 11 and Aurora, Golden, and Loveland with 10 each.  (Click on those city names for individual city brewery maps.)

There are 6 tiny towns with less than 500 people that have a brewery.  They are Crestone (with a population of 138) with T Road Brewing, Divide (143) with Paradox Beer Co., Florissant (172) with Funky Town Brewing, Rollinsville (194) with Howlin Wind Brewing, Grand Lake (410) with World’s End Brewpub, and Lake City (432) with Lake City Brewing.

The smallest town with two breweries is Silverton with 622 people and home to Avalanche Brewing and Golden Block Brewery.  There are 4 small towns that have 3 breweries! The very small town of Ouray which only has 898 people is home to Ouray Brewery, Ourayle House Brewery (Mr. Grumpy Pants), and Red Mountain Brewing.  The neighboring towns of Winter Park (1,033) and Fraser (1,400) have three breweries each with Big Trout Brewing, Hideaway Park Brewery, and The Noble Buck in Winter Park and Camber Brewing, Fraser River Brewing, and Vicious Cycle Brewing in Fraser.  That’s six mountain town breweries within 3 miles! Finally, Nederland (1,471) is home to Busey Brews, Knotted Root Brewing, and Very Nice Brewing.

Breaking things down even further I have also collected the data for the number of breweries in each individual zip code in Colorado.

North, South, East, West, and Up

The furthest Eastern brewery is Tumbleweed Brewing in Yuma at 102.72 degrees west longitude.

Colorado has the highest breweries in the country!  There are six breweries located at over 9,500 ft altitude:  Two Mile Brewing in Leadville at 10,152 ft, South Park Brewing and HighSide II (Taproom) in Fairplay at 9,950 ft, Breckenridge Brewery & Pub and Broken Compass Brewing in Breckenridge at 9,602 ft, and Telluride Taqueria in Mountain Village at 9,547 ft. There are an additional 11 breweries in towns over 9,000 ft altitude and yet another 15 in towns over 8,000 ft. That’s 32 breweries over 8,000 feet! 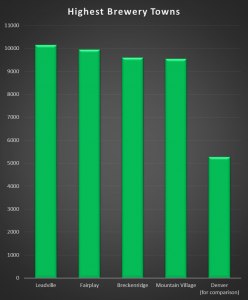 Now for the areas that are missing out…

Morgan county is the largest population county without a brewery (28,404 population).

Three big cities that have breweries but not many compared to their population are Thornton with only 2 breweries for 111,876 people, Aurora which has 10 breweries but could easily support more with their 386,261 people, and Pueblo with 4 breweries and 144,962 people (to include Pueblo-West).

When did all of these breweries open?

The following chart is a timeline of the number of breweries that were open at the end of the year since 1979 when Boulder Beer opened. (There are some slight differences between what CBL lists and what is on my personal spreadsheet.)

Here again is that heatmap of the currently open CO breweries, with each appearing as they opened over time.  With this you can zoom in to any area and if you pause the playback, you can see popups with the opening date for each brewery.

This chart shows the number openings and closings by year.

The average number of breweries to open each year over the past ten years is 41, the peaks being in 2014 with 68 breweries and 2018 with 65 breweries.

The average age of the currently open breweries is 8.5 years.

The following chart shows the average number of brewery openings each month of the year, with January having the fewest on average (1.6) and June & July having the most (5.0). 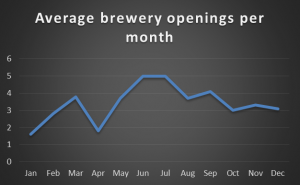 In the past 10 years, there was an average of 14 closures each year with the most in 2020 with 36 closings mostly due to COVID, (which is still not nearly as bad as many predicted).

Through my research I’ve identified these 247 breweries that have opened since 1979 and subsequently closed.  In the chart, those marked in green have closed in the past 10 years and those in yellow are the 25 of which are not included in the above charts since I do not have an opening and/or closing year for them.  If there are any Colorado brewery history geeks out there that would like to help me fill in those gaps or provide information on other breweries that I might be missing, please contact me.

Of those that closed in the past 10 years, the average lifespan of those breweries was 6.5 years with the oldest being Boulder Beer Co which closed after 40 years and 3 months, and the quickest closure was 1876 Aleworks which was only open for 51 days!

How does Colorado compare to other states?

For this I went to the Brewer’s Association for their help with the numbers.  (Note:  This data is from early December and there are differences from CBL numbers as these are Independant Craft Breweries only).

Colorado is in the Top 5 for most breweries!

Notes:  While CA remains the undisputed leader, both PA & NY have exploded in growth of craft breweries in the past couple years.  CO & WA have long been very close to each other for number of breweries.

Click here for a chart of the total number of breweries in all 50 states (plus DC).

Colorado is also in the Top 5 for most breweries per person!

Note:  *While WY is ranked 4th for breweries per person, they are ranked 42nd for number of breweries.

Extra geek points:  If I score each state by their ranking from 1 to 51 (including DC) for both total number of breweries and number of breweries per person and add these two numbers together, I created my list of best brewery states to live in (lowest numbers win).

Click here for the chart of the combined rank score for all 50 states (plus DC).

I hope you enjoyed geeking out over these numbers as much as I did in putting this together.  If you have any questions or are curious about other data that I didn’t cover, please feel free to contact me!